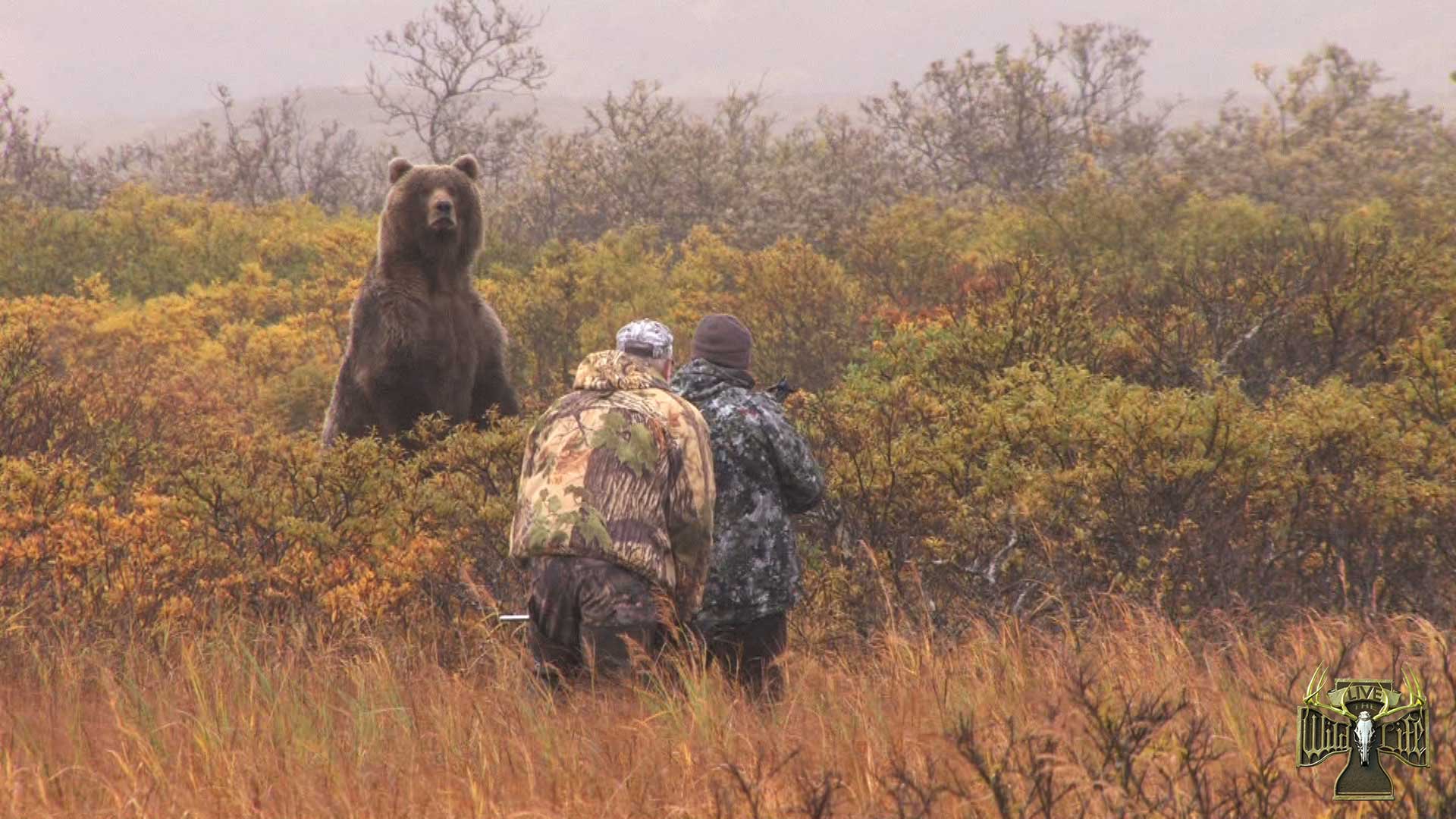 As the bear made his way towards me there was no doubt that this was a shooter bear.  The only question was the path he would take.  We had been hunting for four days, not seeing many bear at all so this might be my only chance.   My heart was pumping wildly as that question was answered; this was actually going to happen.  He crossed the creek and headed for the bank I was on.   My position was elevated on the bank as the bear crossed under me 5 yards away.   The only thought that went through my mind as I drew the bow was Bend at the waist and don’t blow this shot.

This was my second trip to Alaska for Brown Bear, what I consider to be the ultimate North American Trophy.  My first trip was successful and I went home with an 8 1/2’ bear taken at 12 yards with a bow.  This was a great week in Alaska, and while my bear was a gorgeous one, he couldn’t compare to some of the behemoths we saw in that area.  I couldn’t get those big bears out of my head, so I vowed to return and try to kill one of those giant Peninsula bruins. 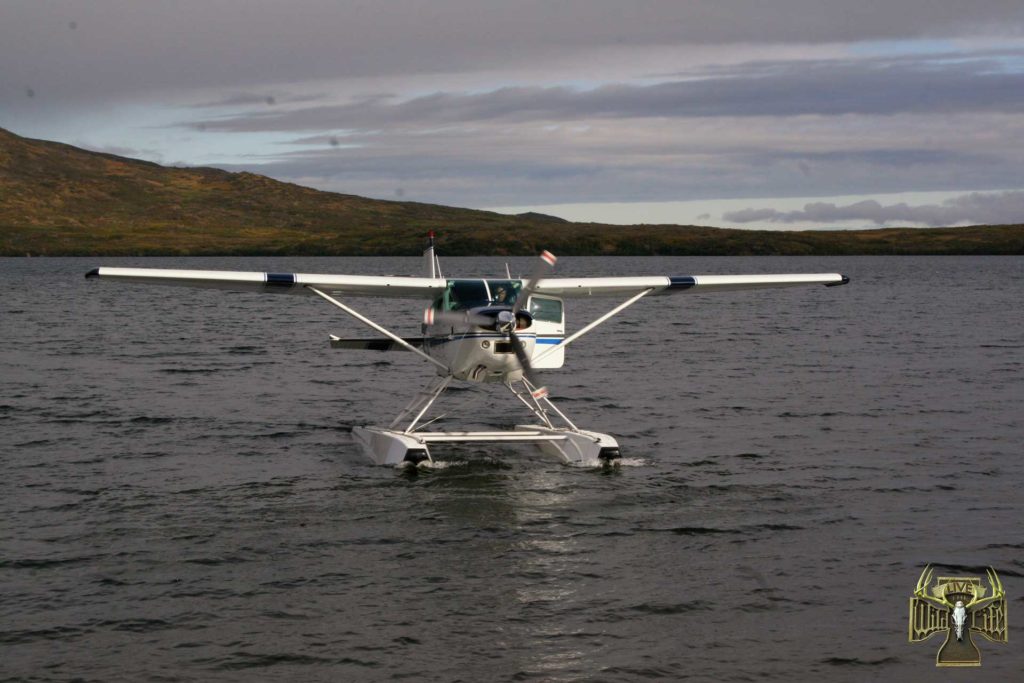 As we made the 3,000 mile trek to Anchorage, and then to the Peninsula, on every size and type plane imaginable, our anticipation grew.  With that anticipation came a certain amount of trepidation.  Anything can and does happen in Alaska, and the weather is always a factor. You can be stranded at a spike camp for days, and because all travel is by bush or floatplane, that adds another level of, shall we say, adventure.  Not only that, but I would be hunting an animal that can charge in a heartbeat and deliver a fatal injury in seconds.  But for me, it’s all part of the dream of brown bear hunting.

This hunt was totally different than my first trip.  There weren’t many salmon in the creek, so we were seeing fewer bears.  We walked and glassed for three days from a high vantage point, seeing only a handful of bears that were too far away to make a move on.  On the fourth morning, the decision was made to hike down to the creek and hunt the banks.  After about two hours we spotted a good nine foot bear.  As he walked along the creek, we watched him cross over and disappear into the alders a good distance away from our position.  I turned to my guide, Dwayne, and said, “Let’s follow him”. 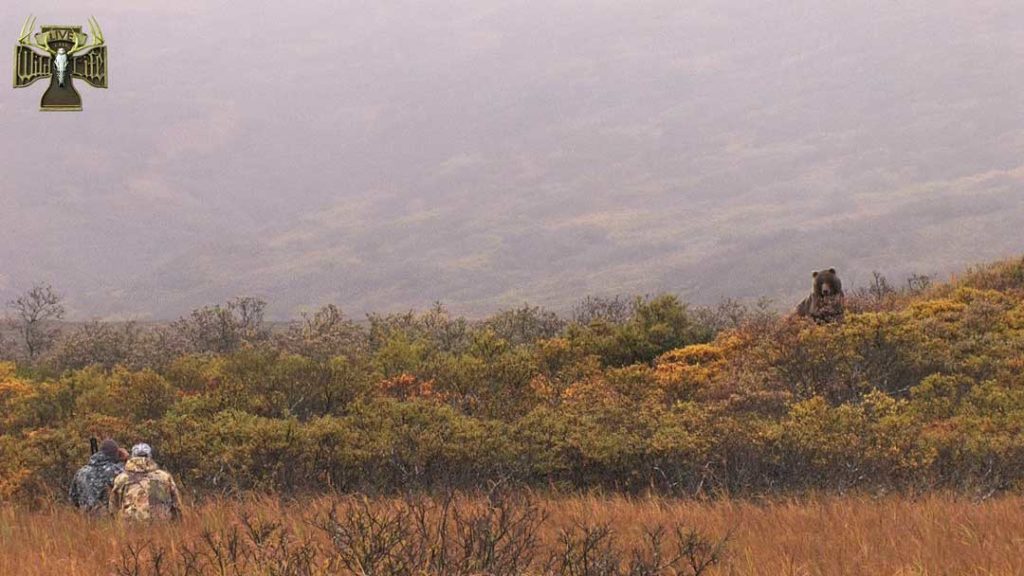 Dwayne didn’t think we could get on him, but we hadn’t seen much, so I thought it was worth a try.  We would occasionally get glimpses of the bear appearing in and out of the brush as we followed him for at least a mile.  Then we saw him bed up.  That was our chance.  We had to cover 500 yards to get to him, and we made the first 400 yards without being detected.  Quietly covering the remaining 100 yards of muskeg would be a challenge.  We decided to have our cameraman, who also happens to be my son Chris, set up there and get the stalk on tape from a distance.  Every step was carefully calculated as the mud noisily sucked at the bottoms of our boots.

The bear seemed restless, lifting his head numerous times to scan the area.  We had closed the distance to 50 yards, nearly alerting the bear a few times with the sloshing of our boots.  Then the bear rose.  Sensing something wasn’t right, the bear closed the distance between us and stopped at about 30 yards.  He bluff charged, and then rose up on his hind legs and loudly woofed at us, blowing snot out of his nose.  I looked for an opening to shoot through but couldn’t find one.

We’ve all shot at a standing bear on a 3-D course, but to me that is a lone lung shot, and it wasn’t one I was willing to take while standing in front of a live brown bear.  The bear dropped down, worked downwind into the thick brush, caught our wind, and was gone.  It was a very intense moment, and one I will never forget.

Energized from this encounter, Dwayne, Chris and I cut our way down to the creek to set up.  During our stalk, we’d heard a bear chasing fish in the creek.  The brush was thick, and walking was difficult, but we made it down and set up on a high bank about six feet above the creek with the wind in our face.

Just after getting set up at our position, we saw a bear about 100 yards away, and he was walking down the sandbar.  Judging the size of this bear was not a problem – he was absolutely huge!  As he got closer, everything was working out perfectly; the shot would be 25 yards on the edge of the sandbar.  I thought to myself, This is really going to happen! 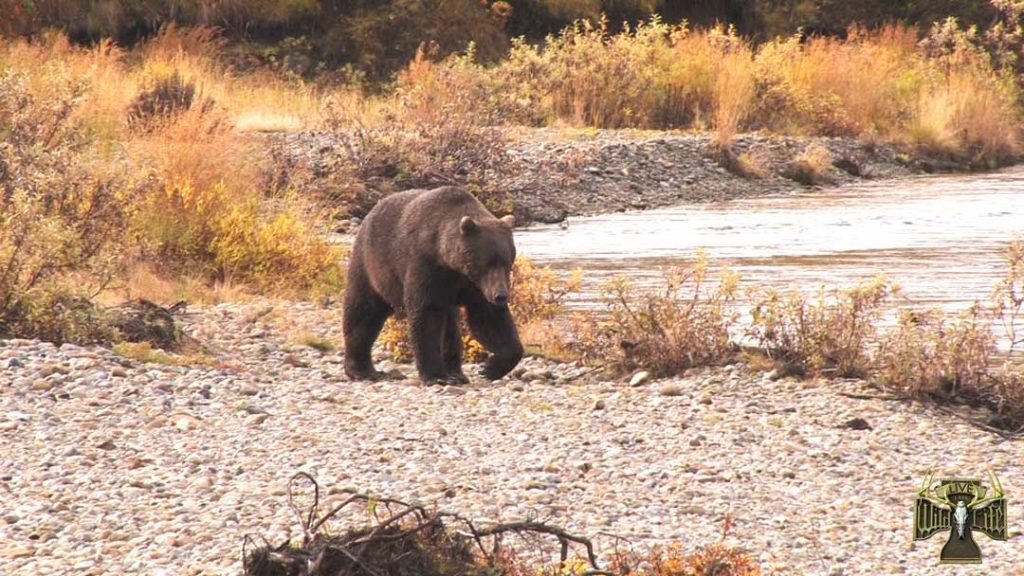 Then, the bear changed course and entered the creek.  I froze as he headed right for the bank I was standing on.  No one dared to move as the monster bruin walked along the bank just three yards from us.  I swear we could hear each other’s heartbeats.  After he passed by us, I carefully stood to take my shot at the monster bear that was now only five yards away.  All I could think was, This is just like shooting a whitetail under my stand.  Bend at the waist…I wasted no time releasing the arrow, which passed through both lungs.  As the bear ran off, I could see the blood pouring out of him. 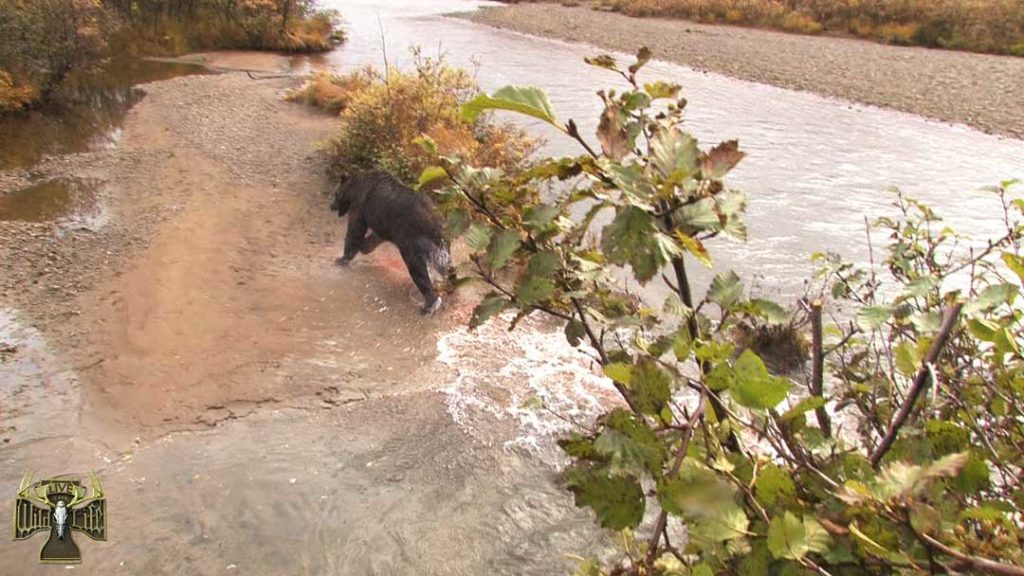 I knew the shot was lethal, but not seeing him go down always created doubt.  The bear had bailed into some thick cover.  So to say that tracking him was interesting is an incredible understatement.  There was plenty of blood, but the bush was so thick that there would be no way to see a charging bear before it was too late. 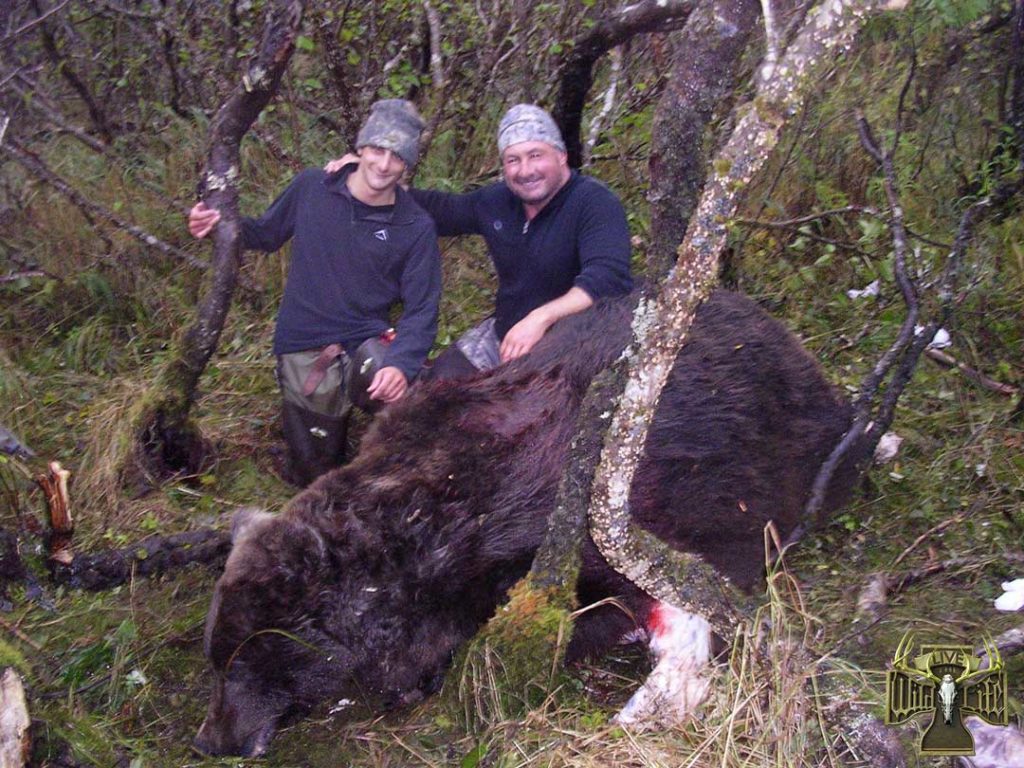 Despite the anxiety, we pressed on and finally located my bear about 80 yards from where I had shot him.  There was no ground shrinkage.  I was in awe of that animal, and even though I haven’t spent much time around brown bears, I knew this was a really big bear.  I just didn’t know how big.  My bear currently ranks as the world record bow-killed brown bear in the SCI record book (SCI scores with lower jaw attached), with a score of 29 6/16.  It comes in at number two all-time in Pope and Young with a score of 29 0/16 (lower jaw removed). 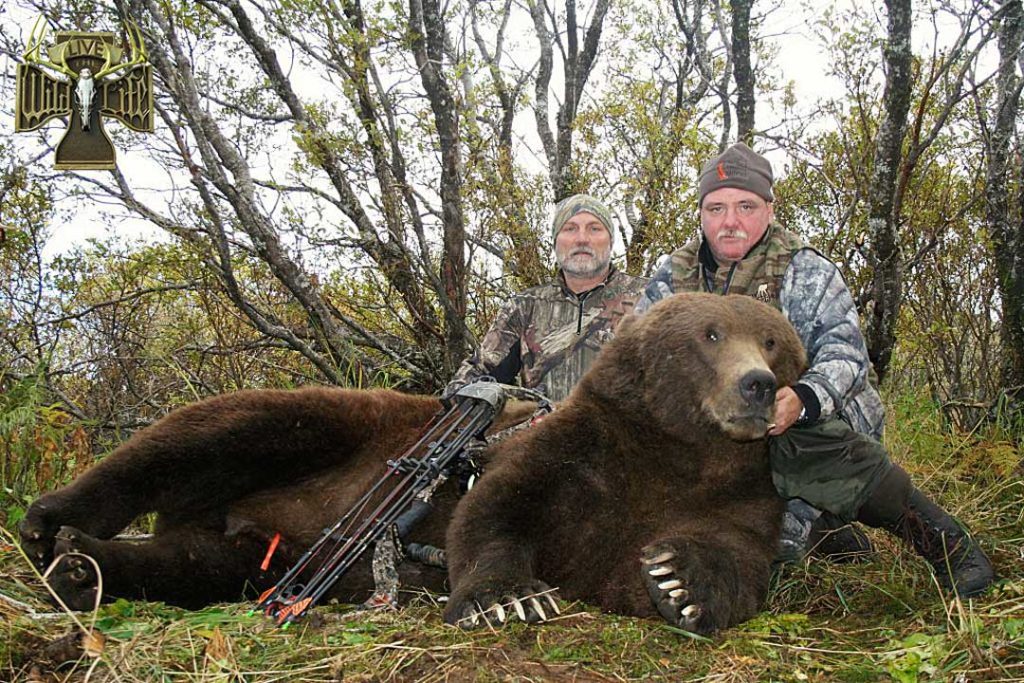 My friends Tim Peloso and Mike Gilbert were also on this trip and hunted from another spike camp.  Our outfitter, who flew in to check supplies on the third day, told me of the monster bear Tim had shot his first day.  And Mike, who had run the camera on my first hunt, caught Tim’s hunt on camera.  Tim’s bear scored 27 14/16.  Neither Tim nor I could have imagined this outcome when we booked this hunt.  Ugashik Lake Outfitters, Gus and Koreen Lamoureux, their guides and their expertise of their area were invaluable to the success of these hunts.  And of course, having the opportunity to share such an exhilarating once-in-a-lifetime experience with my son was truly priceless.